If anyone is interested in a Google Wave invite, follow me on Twitter and send me a message. I have a few invites to give away. I will give a couple out to new Twitter followers!

New Reviews on the Way

Another day, another PING review! So we recently had a look at the PING i15 Irons and the PING g15 hybrid. Today we are going to have a look at the big dog of the bag, the PING G15 Driver. I have seen [...]

Today we are going to have a look at the PING G15 Hybrid. We recently fell in love with the i15 irons from PING and were excited to check out the newly designed hybrid offering from PING. We figured we [...]

Now, in 2009, PING has released the 15 line of clubs, including new i15 and G15 irons. It seems PING has listened to the feedback from their loyal customers and made some welcomed changes to the i15 line. [...]

How to Save Money on Irons – Buy Used!

In the current economic climate, we're all looking to save a buck wherever we can. The days of being carefree with our cash are in the rear view mirror. Do we really need to be shelling out $1000 for [...]

First look at the Ping i15 irons. Review will be coming soon, for now have a look at some pictures comparing the i15s to the Mizuno MP-57s.

My wifeâ€™s birthday is in Mid-August and we decided to go on a little 4 day golf getaway to celebrate. Yes, I am lucky enough to be married to someone who loves golf nearly as much as I do! We had [...]

Holy Cow, Having a Child is Time Consumi...

I have been such a slacker on The Deep Rough the past year. Coincidentally, our first child, Sophia, is having her first... 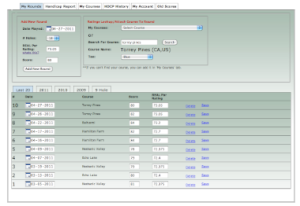 Today we are going to have a closer look at a website that offers a handicap tracking service. There are numerous sites ...

Jackets with â€œMobileWarmingâ€ technology to keep a golfer comfortable during the coldest of rounds, strategic...